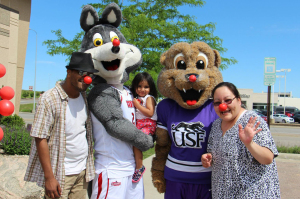 In celebration of the second annual Red Nose Day, Gage Brothers Concrete partnered with Feeding South Dakota for a FUN-raiser on Thursday, May 26.

Red Nose Day is a fundraising campaign run by Comic Relief, Inc., that aims to raise awareness and money for children and young people most in need, in the U.S. and around the world.

Gage Brothers felt that hosting a Red Nose Day fundraiser would be an easy way for people in Sioux Falls to donate and become engaged in the fight against hunger.

According to the USDA, one in seven Americans struggles with hunger.

For every person who stopped by the Gage Brothers office on May 26 and had their photo taken wearing a red nose, Gage Brothers donated one dollar to Feeding South Dakota.

“We are pleased to be working with Feeding South Dakota to support our mutual beliefs that no one in our community should go hungry,” said Gage Brothers president Tom Kelley. “We wanted to use Red Nose Day to help us raise awareness about the issue of hunger during a time in the year when donations to food banks have a tendency to dwindle.” 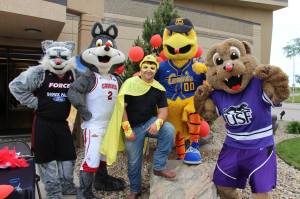 More than 250 people dressed up in silly costumes and said “cheese” for a good cause. Mascots from the University of South Dakota, University of Sioux Falls, Sioux Falls Canaries and the Sioux Falls Skyforce were on hand to entertain the crowd and pose for photos.

Gage Brothers pledged one dollar for every photo and added an additional gift of $500.

Feeding South Dakota was presented with a check for $775, which will translate into more than 3,800 meals made available to those who need it most.

As the city’s hub for integrated food poverty assistance, Feeding South Dakota provides temporary food assistance to more than 190,000 hungry individuals and families in South Dakota on an annual basis. In addition, their BackPack Program gives food every weekend to more than 5,000 kids who otherwise might go hungry. 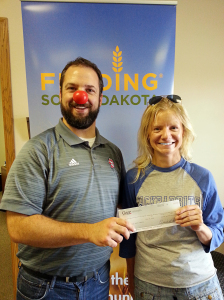 Feeding South Dakota is part of Feeding America, an organization which offers relief to families in need through its nationwide network of food banks. This network spans 200 food banks and about 60,000 food pantries in the United States today. Last year, Feeding America served more than six billion meals to individuals in need.

“We feel extremely blessed to have the opportunity to partner with Gage Brothers on such a fun event,” said Kerri DeGraff, Development Director for Feeding South Dakota. “The event was a unique way to bring people together to share in laughs, while also helping to raise funds to help children who need it most.”

She added, “Thanks to Gage Brothers generous support, 3,875 children in need will be provided a nutritious meal.”

“A core value of Gage Brothers has been to give back to the community in which we live and work,” added Kelley. “We look forward to continuing a partnership with Feeding South Dakota in the years to come.”

Thank YOU to everyone who participated in Gage Brothers’ Red Nose Day FUN-raiser this year!