Gage Brothers Concrete has been awarded the precast contract for the new fieldhouse.

Construction is slated to begin this summer.

“We are proud to have won this contract and thrilled to continue our relationship with Howard Wood Field,” said Gage Brothers president Tom Kelley. “The facility is an integral part of the city’s fabric.”

He added, “Hundreds of former and current Gage Brothers employees have competed at Howard Wood or watched a football game from the stands, and I think that emotional investment goes a long way at our plant.”

Nearly a century in age, Howard Wood Field looms as one of the region’s best-known track and field venues. The birth of track and field at Howard Wood dates back to 1923. Marking its 90th running last year, the Howard Wood Dakota Relays regularly attracts more than 3,000 student athletes from the middle school, high school and college ranks.

For many years, all of the local high schools and both colleges (Augustana University and the University of Sioux Falls) played football there. Lincoln, Washington and Roosevelt high schools still claim Howard Wood as their home turf.

Named for a longtime coach at Washington, Howard Wood Field also served as the finish line for the 2015 Sioux Falls Marathon and Half Marathon.

As it happens, Howard Wood Field was the company’s first significant foray into sports facility construction.

In the decades that followed, Gage Brothers began to churn out precast for dozens of high school gymnasiums, pro arenas and college athletic facilities throughout the Midwest.

Howard Wood Field is owned and operated by the school district, which has continued to update the classic facility.

But expectations of what sports venues should be have increased lockstep with the needs of both athletes and spectators.

Sports facilities are built not only to be a place where athletes come to test their limits but to also contribute to the vitality of the broader community.

Howard Wood is no different and about to undergo more changes thanks to the approval of school officials.

The renovation will modernize the locker rooms and restrooms and also expand the athletic training areas. But the biggest part of the renovation project involves the fieldhouse, which has not changed since Albert and William Gage, Jr. provided materials for the original structure in 1957.

Fifty-nine years later and with a bolstered résumé that includes Target Field, TCF Bank Stadium and the Edward Jones Dome, Gage Brothers will fabricate almost 10,000 square-feet of wall panels and more than 100 precast pieces for the new fieldhouse.

“The fieldhouse renovations will do a great deal to enhance the historic site,” added Kelley. “And the fact that Gage Brothers has won four contracts for Howard Wood over the past sixty years is a testament to our corporate endurance and ability to innovate our products to meet changing market demands.”

This will be the 30th building project that Gage Brothers has worked on with Beck & Hofer since 1988. Previous collaborations include the Boys & Girls Clubs of the Sioux Empire, Elmen Park and Big Sioux Power Sports.

“Gage Brothers has developed a great relationship with Beck & Hofer over the past 20-plus years,” said Kelley. “We think of our relationship as more of a partnership.”

The renovations will not be complete in time for 91st edition of the Howard Wood Dakota Relays, but should be ready by the 92nd running in 2017. 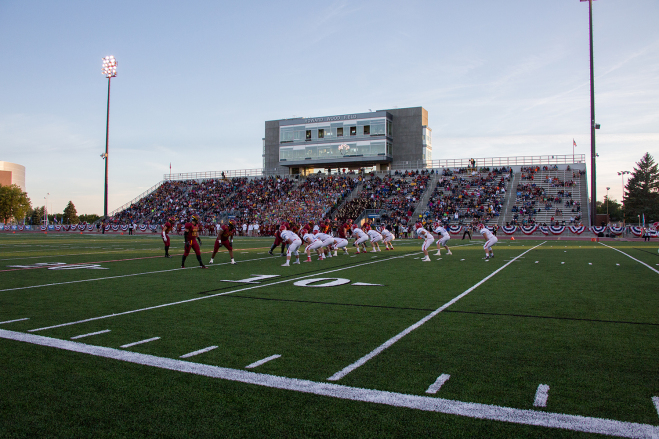